The premiere opening of the 22nd season of "Arthur," a PBS cartoon creation, features the same sex marriage between Patrick and Mr. Ratburn. The mainstreaming of the LGBTQ lifestyle is nothing new to television, but it seems to have reached a new low by including cartoons aimed at the pre-school audience. My advice to parents would be to severely limit TV time for your children. (READ MORE) Use your DVR to record and preview the material you let them see and if you have a DVD player, you can use that to play material that you approve of. I'm sure there is still some programming out there that is worthy of viewing, one that comes to mind is, "Daniel Tiger" a cartoon spin-off of "Mr. Rogers Neighborhood." The characters are the children of the original ones. My 2 and 1/2 year old granddaughter loves "Daniel Tiger."

Parenting in the 21st Century is a real battle for the hearts and minds of our children. (spiritual warfare) We need to pray for our children and grandchildren as a priority and as a Church, take serious the vows we agreed to, when children are Baptized, with a renewed vigor. "Be sober-minded; watch. Your adversary the devil prowls around like a roaring lion, seeking someone to devour." (1 Peter 5:8) Let's not let that be our children.

Attachment: ‘Arthur’ Opens Season With a Same-Sex Wedding and a Cake - The New York Times.pdf 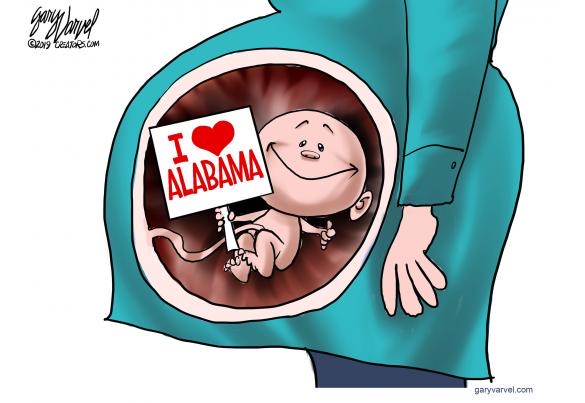 This evening Alabama Governor Kay Ivey signed into law The Alabama Human Life Protection Act. The law is sure to ramp up the debate in the upcoming presidential election as well an appeal to the Supreme Court.

When Will We Ever Learn?

The cover page of this months World caught my attention immediately. The cover features the portraits of an "All Star" cast of socialist dictators from the 20th century along with some newbies, Ho Chi Minh, Joseph Stalin, Pol Pot, Hugo Chavez, Karl Marx, Fidel Castro, Mao Zedong, Adolf Hitler and Nicolas Maduro. What do they have in common? They are responsible for the deaths of 100's of millions of people, simply put they are butchers. The feature article focuses on personal stories from the latest victims of the Venezuelan New Socialist Experiment. An inflation rate of more than 2 million percent per year forces working families to scavenge in garbage cans for survival. Disease is rampant as medical treatment and vaccinations are virtually non-existent. It is a nightmare. Why are some of the current political interests in this country moving toward socialism? Socialism is a wolf in sheep's clothing.