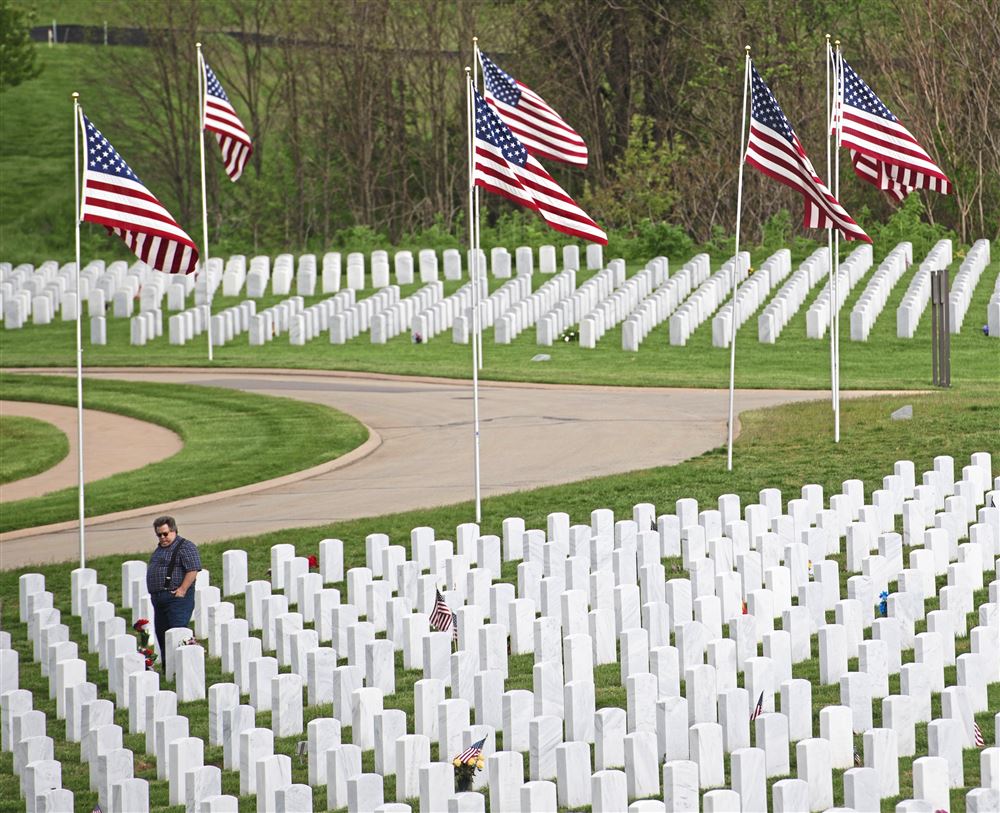 We came from big cities, small towns and family farms, the best of the best, treasured sons. So much to live for in our lives so much to be done. We took the oath, to our country, we will defend against all enemies foreign and domestic, so help us God. Trained for war we left our homes and loved ones behind.

My friend and brother said to me one day, "My biggest fear is to be left behind, forgotten in this foreign land. If I die promise me this, bury me in hallowed ground." To this I nodded ascent, we hugged, "It's all good man, I won't let you down."

No one knew, that day would  soon come and a hero he would be. Laid down his life for his brother's. An act of valor, no second thoughts. His blood spilled out on the desert plain, I did my best to stem the flow. Holding his hand, my ear to his lips, with his last breath he gasped, "Hallowed ground, don't forget."

Two men in dress uniforms, standing tall, two loud knocks on his front door. They saw them pull up, the only warning they had. They knew the news had to be bad.

I accompanied my brother home, his coffin draped in the flag.  I kept my promise made to him that fateful day, to see him buried in hallowed ground. I never left his side. "Don't forget," the last words he said, still  an echo in my head.  In hallowed ground we laid him down, many tears were shed that day, in hallowed ground he found his rest. I saluted him and paid my last respects, tears staining my dress blues breast.

I went to his parents house that  day to tell his story. I will never forget. We laughed about him, we cried, I finally told the story, how he died, a hero, nothing less. I turned around as I headed out the door, and asked of them a favor, "Promise me this, I'm off to war, If I don't make it back alive, lay me down to rest by your son, my brother's, side.  With a crisp salute and a "Semper Fi," I left, new tears flooding, from all our eyes. His last words ringing in my head, "Never forget... hallowed ground," he said.

Authors Note: This is a work of fiction and is not autobiographical in any way. I have never had the privledge of wearing our country's uniform. My family's  service to this country goes as far back as I know, to the Civil War, where you will find my great-great grandfather's name on a monument of those from Pennsylvania who fought at Gettysburg.  My grandfather served in WWI, my father in WWII, my brother served in the Navy during the Cold War, and his son, my nephew is currently in the Navy. He served aboard USS Michael Murphy and was deployed for two years. I stand in awe of my family and friends who have served and especially those who  have paid the ultimate price for our freedom. Never forget!

Why America's Record Godlessness Is Good News for the Nation. (A rebuttal) 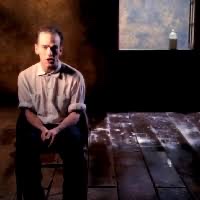 "Why America's Godlessness is Good News for the Nation " was the title of an Op-Ed run in the Los Angeles Times on April 2nd. authored by Phil Zuckerman an Associate Dean of Pitzer College and the author of "Society Without God: What the Least Religious Nations Can Tell Us About Contentment."

According to the most recent Gallup Poll released earlier this month, for the first time since Gallup began tracking numbers in 1937, more people in America are not members of a church, synagogue or mosque than are. In 1945, 75% of all Americans were members compared to today's 47%. Zuckerman continued to site all the troubling statistics that document the decline of Christianity in America. These are facts that cannot be disputed.

What I do dispute is the conclusions that he draws anecdotally at best, from history and present day to make his case.  He contends our collective fears, that moral decline and societal destruction is directly proportional to increased secularism, is incorrect.  Based on our historical observation, that forced secularization, led to the mass atrocities, crimes, and moral outrages committed in the 19th. century by  Nazi's and Communist totalitarian regimes. He states that what we have going on now is different.  We are in the midst of a natural organic decline towards secularization brought about by  better education, more prosperity, and living safer, secure and peaceful lives and will not lead to societal ruination.  In other words he is implying that as society becomes more educated and prosperous people begin to realize that religion is truly the opiate of the people that Karl Marx said it was.

"Enlightened"  people are more likely to revere the Scientific Method, receive vaccines, and support: sex education, reproductive rights, gay rights, death with dignity, gun safety legislation and drug abuse. He maintains that the more secular democracies, Japan, the U.K., Scandinavia, Australia and Canada, are willingly more progressive and don't have that religious drag preventing a universal  acceptance of the aforementioned liberal agendas and they are better off for it. What he implies is that people of faith are ignorant and are unable to go along with this natural  occurring societal evolution, that  will inevitably lead you to the realization that there is no God and we will be better off as a society embracing the inevitable.

I might remind Mr. Zuckerman, Francis Bacon a Christian, was credited with giving us the Scientific Method! There are thousands of Christian scientists that have contributed greatly to our knowledge of  the pure sciences and medicine in the past and continue to do so today. Science and faith are not mutually exclusive, that is Enlightenment philosophy. The Enlightenment brought us the French Revolution, guillotines, Marxism and the totalitarianism of the 19th. century. History is full of examples of the moral decline of empires and their inevitable ruin, read a world history book Mr. Zuckerman.

Yes, people of faith do have problems with assisted suicide, abortion, homosexuality, same sex marriage and legalization of drugs. You see, we believe in a transcendent truth that comes from outside of us. It is bigger than we are. Otherwise, truth is what you say it is- what is true for me may not be true for you and therefore, there is no truth at all. If everything is relative how can you have a moral society?  You cannot. God has revealed His truth to us in written word, the Bible. You might put that on your must read bucket list, Mr. Zuckerman.

What you describe as natural organic decline is just as evil as the horrors of the 19th. century and you are blind to it.  Our holocaust in the U.S. is the 62 million babies slaughtered in abortuaries since 1973, the sexual revolution has normalized promiscuity, the definition of marriage has been changed and the nuclear family is under attack. You talk about scientific truth yet you deny the basic biological fact of being born either male or female. You say we would be better off as a nation of atheist's, embracing immorality and denying God? Who is ignorant of the facts Mr. Zuckerman?

I'll leave you with a quote from John Adams: "Our Constitution was made only for a moral and religious people. It is wholly inadequate to the government of any other."  You see Mr. Zuckerman someone way smarter than you realized that if we lose our religion, we lose our morality, and we will lose our country.  How is that good news for America? 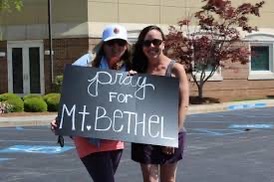 The largest United Methodist church in the  Atlanta metro area, Mt. Bethel United Methodist Church, finds itself under siege by its own liberal Bishop, Sue Haupert-Johnson and her minions. The latest attack by the bishop was to reassign the conservative and orthodox pastor, The Reverend Jodi Ray, to a newly "created "position within the North Georgia Annual Conference of the United Methodist Church. This was a thinly veiled attempt to replace the pastor with someone more aligned with the LGBTQ+ issues within the denomination. Officially the U.M.C. still maintains the traditional Biblical teachings on marriage, gender and sexuality, propped up by the African Church and a network of American pastors and laity within the church, but is largely ignored by the American bishops. Gay weddings are performed and gay pastors are ordained and foisted upon congregations. Not so much at Mt. Bethel U.M.C.,their pastor has refused  the reassignment and is backed up by his congregation. The Church  has begun a disaffiliation process with the denomination and Pastor Ray has surrendered his credentials as an ordained elder in the U.M.C.

In 2016 the General Conference, the U.M.C.'s global decision making body, voted to hold a special session to decide LGBTQ+ inclusion in the denomination , which has come up at every General Conference for the last 30+ years. The session strengthened the denomination's existing bans on ordination and marriage of LGBTQ+ United Methodists. Push back came from a faction that proposed a split of the denomination called, "A Proposal of Reconciliation and Grace Through Separation."  The final vote on this plan is not scheduled until August-September of 2022. The plan will basically split the denomination  between liberals and the traditional Bible believing congregations. Everyone keeps their Church properties and goes on their separate ways. I would hope this works out as outlined, but the skeptic in me says probably not. The liberal left never gives up this easily and there is sure to be a battle royale over assets of the U.M.C. to come. The Wesley brothers will be spinning in their graves if they haven't begun to do so already. We should keep Mt. Bethel Church in our prayers as well as our Methodist brothers and sisters in Christ who stand firm for the Truth.